Tagg is upbeat, can't sit still, and talks a million miles a minute.He's ADHD so he has all of the normal symptoms for that.

Anna Sophia Hale was born in 1996. She grew up in a small town where everyone knew each other. She and her younger brother, Taggert, were generally close but had a few disagreements here and there. Anna hated her name and wanted to be called “Ash”, her initials. Ash grew up loving and studying technology. She liked to build and repair electronics and did some repairs around her town to earn money.

When she was 12 she saw her first paranormal being. She was in her bed about to fall asleep when she saw a pale glowing figure in her room. She hid under the covers, terrified of the ghost. When she looked back, the figure was gone. Ash tried to sleep but was kept awake most of the night.

The next morning, she told her mother about the ghost she saw. Her mother scolded her for being so childish and told her not to speak of it again. Ash was upset that her mother didn’t believe her so she set up her video camera in her room that night. The ghost came again but she had positioned the camera wrong and missed the ghost. She showed the video to her mother who scolded her again.

Ash told some of her friends about the ghost but they laughed at her. She was sick of being scolded or made fun of for what she saw so she packed her electronics, money, and some clothes, and left. She managed to survive off of repairing peoples electronics while at the same time searching for paranormal beings. After researching for 2 years, Ash found the Paranormal Investigation Bureau and was recruited as an Investigator.

Once she enrolled, he just kinda, tagged-a-long.

Tagg uses a simple staff and his only investigative possesion, tracker glasses, meaning he can see where people and things have gone while wearing them. He always walks around with his notebook and pen, taking notes. 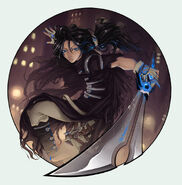 Tagg's Class
Add a photo to this gallery
Retrieved from "https://paranormalinvestigationroleplay.fandom.com/wiki/Taggert_%22Tag-a-long%22_Hale?oldid=4536"
Community content is available under CC-BY-SA unless otherwise noted.