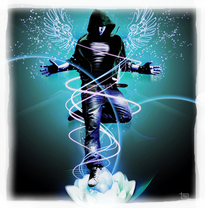 Devas are celstial beings created from the essence of the good deeds of humans over extended periods of time.Though due to the fading magic in the world today, they have become more rare. They totally despise daemons and will go to extreme lengths to destroy them. They have the ability to heal others, teleport, conduct electricity through touch, and a resilience to most forms of magic, as well as immortality. They rarely use weapons, but easily become weak when there is negativity amongst the people around them.

They do no believe in the use of them

Retrieved from "https://paranormalinvestigationroleplay.fandom.com/wiki/Race-Class:_Devas?oldid=7117"
Community content is available under CC-BY-SA unless otherwise noted.