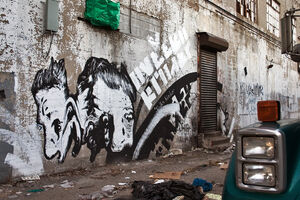 The Bronx is the northernmost of the five boroughs of New York City. It is also known as Bronx County, the last of the 62 counties of New York State to be incorporated. Located north of Manhattan and Queens, and south of Westchester County, the Bronx is the only borough that is located primarily on the mainland (a very small portion of Manhattan is located on the mainland named Marble Hill). The Bronx's population is 1,400,761 according to the 2010 United States Census. The borough has a land area of 42 square miles (109 km2), making it the fourth-largest in land area of the five boroughs, the fourth most populated, and the third-highest in density of population. The Bronx is divided by the Bronx River into a hillier section in the west, closer to Manhattan, and the flatter East Bronx, closer to Long Island. The West Bronx was annexed to New York City (then largely confined to Manhattan) in 1874, and the areas east of the Bronx River in 1895. The Bronx first assumed a distinct legal identity when it became a borough of Greater New York in 1898. Bronx County, with the same boundaries as the borough, was separated from New York County (afterwards coextensive with the Borough of Manhattan) as of January 1, 1914. Although the Bronx is the third-most-densely-populated county in the U.S., about a quarter of its area is open space, including Woodlawn Cemetery, Van Cortlandt Park, Pelham Bay Park, the New York Botanical Garden and the Bronx Zoo in the borough's north and center, on land deliberately reserved in the late 19th century as urban development progressed northwards and eastwards from Manhattan with the building of roads, bridges and railways.

Retrieved from "https://paranormalinvestigationroleplay.fandom.com/wiki/New_York_City/The_Bronx?oldid=5401"
Community content is available under CC-BY-SA unless otherwise noted.