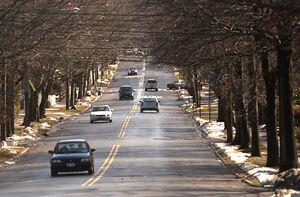 Staten Island is a borough of New York City, New York, United States, located in the southwest part of the city. Staten Island is separated from New Jersey by the Arthur Kill and the Kill Van Kull, and from the rest of New York by New York Bay. With a population of 468,730, Staten Island is the least populated of the five boroughs but is the third largest in area at 59 sq mi (153 km2). The Borough of Staten Island is coextensive with Richmond County, the southernmost county in the state of New York. Until 1975, the borough was officially named the Borough of Richmond. Staten Island has been sometimes called "the forgotten borough" by inhabitants who feel neglected by the city government. Staten Island is overall the most suburban of the five boroughs of New York City. The North Shore — especially the neighborhoods of St. George, Tompkinsville, Clifton, and Stapleton — is the most urban part of the island; it contains the officially designated St. George Historic District and the St. Paul’s Avenue-Stapleton Heights Historic District, which feature large Victorian homes. The South Shore has more suburban-style residential neighborhoods and is home to the two and one-half mile long F.D.R. Boardwalk, the fourth longest in the world. Historically, the central and southern sections of the island were dominated by dairy and poultry farms, almost all of which disappeared in the 20th century. Staten Island used to claim the largest landfill in the world. It was closed in 2001, then shortly afterward reopened to house the debris from the September 11th attacks, and then shortly after closed for good. The landfill is now in the process of being made into what will be New York City's largest public park.

Retrieved from "https://paranormalinvestigationroleplay.fandom.com/wiki/New_York_City/Staten_Island?oldid=5376"
Community content is available under CC-BY-SA unless otherwise noted.