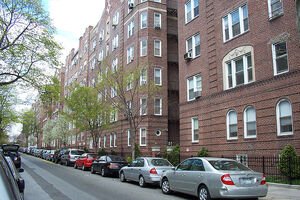 Queens is the easternmost of the five boroughs of New York City. The largest borough in area and the second-largest in population, it is coextensive with Queens County, an administrative division of New York state, in the United States. Located on the western portion of Long Island, Queens is home to two of the three major New York City area airports, JFK International Airport and LaGuardia Airport. These airports are among the busiest in the world, leading the airspace above Queens to be the most congested in the country. It is also the location of the New York Mets baseball team, the US Open tennis tournament, Flushing Meadows Park, Kaufman Astoria Studios, Silvercup Studios, and Aqueduct Racetrack.

Retrieved from "https://paranormalinvestigationroleplay.fandom.com/wiki/New_York_City/Queens?oldid=5403"
Community content is available under CC-BY-SA unless otherwise noted.