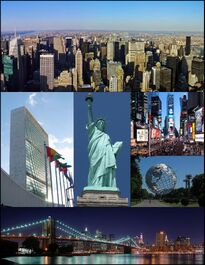 New York is the most populous city in the United States and the center of the New York Metropolitan Area, one of the most populous metropolitan areas in the world. New York exerts a significant impact upon global commerce, finance, media, art, fashion, research, technology, education, and entertainment. The home of the United Nations Headquarters, New York is an important center for international affairs and is widely deemed the cultural capital of the world. The city is also referred to as New York City or the City of New York to distinguish it from the state of New York, of which it is a part.

Located on one of the world's largest natural harbors, New York City consists of five boroughs: The Bronx, Brooklyn, Manhattan, Queens, and Staten Island. With a 2010 United States Census population of 8,175,133 distributed over a land area of just 305 square miles (790 km2), New York is the most densely populated major city in the United States. As many as 800 languages are spoken in New York, making it the most linguistically diverse city in the world. The New York City Metropolitan Area's population is the United States' largest, estimated at 18.9 million people distributed over 6,720 square miles (17,400 km2), and is also part of the most populous combined statistical area in the United States, containing 22.2 million people as of 2009 Census estimates. New York is the most highly googled location in the world; registering 4.6 billion search results as of September 2011.

New York traces its roots to its 1624 founding as a trading post by colonists of the Dutch Republic, and was named New Amsterdam in 1626. The city and its surrounds came under English control in 1664 and were renamed New York after King Charles II of England granted the lands to his brother, the Duke of York. New York served as the capital of the United States from 1785 until 1790. It has been the country's largest city since 1790. The Statue of Liberty greeted millions of immigrants as they came to America by ship in the late 19th and early 20th centuries. Many districts and landmarks in New York City have become well known to its nearly 50 million annual visitors. Times Square, iconified as "The Crossroads of the World", is the brightly illuminated hub of the Broadway theater district, one of the world's busiest pedestrian intersections, and a major center of the world's entertainment industry. The city hosts many world renowned bridges, skyscrapers, and parks. New York City's financial district, anchored by Wall Street in Lower Manhattan, functions as the financial capital of the world and is home to the New York Stock Exchange, the world's largest stock exchange by total market capitalization of its listed companies. Manhattan's real estate market is among the most prized and expensive in the world. Manhattan's Chinatown incorporates the highest concentration of Chinese people in the Western Hemisphere. Unlike most global rapid transit systems, the New York City Subway is designed to provide 24/7 service. Numerous colleges and universities are located in New York, including Columbia University, New York University, and Rockefeller University, which are ranked among the top 100 in the world.

Retrieved from "https://paranormalinvestigationroleplay.fandom.com/wiki/New_York_City?oldid=5377"
Community content is available under CC-BY-SA unless otherwise noted.