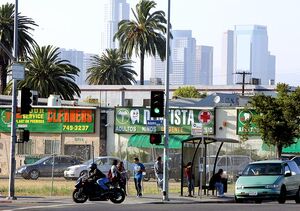 South Los Angeles, often abbreviated as South L.A., is the official name for a large geographic and cultural portion lying to the southwest and southeast of downtown Los Angeles, California. The area was formerly called South Central, and is still widely known as such by its residents. It borders the Westside on the northwest, and Downtown LA on the northeast. In 2003, the city of Los Angeles changed the area's official name to South Los Angeles in hopes of removing the associations of urban decay and street crime with which the name South Central had become associated. The Los Angeles Times uses both the old and new names to describe the area. Some residents of the Los Angeles area (including residents of South Los Angeles) still use the old name. Prominent figures from South L.A., such as Ice Cube, also continue to refer to the area as South Central.

Retrieved from "https://paranormalinvestigationroleplay.fandom.com/wiki/Los_Angeles/South_Los_Angeles?oldid=5392"
Community content is available under CC-BY-SA unless otherwise noted.