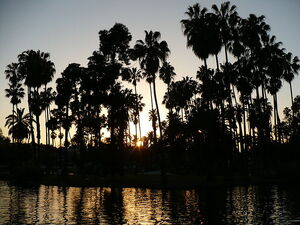 Echo Park is a hilly neighborhood in Los Angeles, California, northwest of Downtown Los Angeles and southeast of Hollywood. Local attractions include Echo Park and its small lake, which at one time was said to contain the largest planting of lotuses outside Asia. The lotus plantings suffered significant die-back between 2005 and 2008, and have been completely gone since then; plans for re-planting (including solicitation of contributions) have apparently been put on hold, as of 2010-2011, pending some clearer understanding of the cause. Westlake is a neighborhood in Los Angeles, California. It should not be confused with Westlake Village, an independent municipality in Los Angeles County near Thousand Oaks and close to the Ventura County line. Westlake derives its name from the lake in what is now MacArthur Park.

Retrieved from "https://paranormalinvestigationroleplay.fandom.com/wiki/Los_Angeles/Echo_Park_and_Westlake?oldid=5802"
Community content is available under CC-BY-SA unless otherwise noted.