This character belongs to TheWiseOne

Juan and his brother Javier were born into a family of Investigators and Occultists. Juan and Javier never saw eye-to-eye, especially when it came to the PIB and the paranormal world: Juan believed in it, but Javier did not want to be any part of it. Being raised in Puerto Vallarta, Mexico, Louis Santiago, the boys' father was called away to the PIB at least once a month, leaving their mother Maria to care for the boys. Maria was an Investigator, but retired early to take care of her children. Maria taught the boys things about the paranormal world. Javier rejected the paranormal world from his life for the most part and when the Javier was 18, Javier moved to Mexico City while 16 year old Juan stayed an Occultist like his father. He trained with him in Mexico, awaiting the day that he would move to New York and become a proper agent.

When Juan was 18, he went on a hunting trip with his father in Montana, chasing the trail of a rogue Lycan named Klaudius. They ventured into the Montana forests and tracked Klaudius to a small ravine near the border. Louis Santiago fought Klaudius while Juan set up a trap in the bushes. Juan was moments away from setting up the trap, when he heard a sickening noise: his father had been killed by Klaudius. When Juan tried to attack Klaudius, bit Juan's shoulder. He fell unconsious as Klaudius got away.

When Juan awoke, he was in a hospital in Jasper, Alberta. The doctors said he was attacked by a large wolf or a small bear. When the PIB caught wind of the story, and that Louis had died and his son had survived, he was taken to New York for "further treatment". Juan hoped that Javier would be there, but his brother was nowhere to be found.

Juan is a very smart kid. He's skilled with computers, electronic devises and so on, though less now than when he was an occultist. He's usually charming and joking around. When he's angry, he tries to bite back his anger, but slips up from time to time. If he's sad, which is more often nowadays, he's quiet and solemn. He likes to play guitar and dance, ride his motercyle and have fun.

Juan is a typical Mexican boy. He has curly brown hair, brown eyes and tanned skin. He's slim but isn't very muscular, though he seems to have been gaining some recently. He has a small dragon tattoo on his right shoulder, a Mexican skull on his back and bite mark scars on his left shoulder. 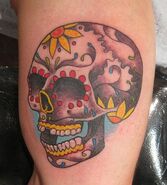 Juan's dragon tattoo
Add a photo to this gallery
Retrieved from "https://paranormalinvestigationroleplay.fandom.com/wiki/Juan_Santiago?oldid=6964"
Community content is available under CC-BY-SA unless otherwise noted.